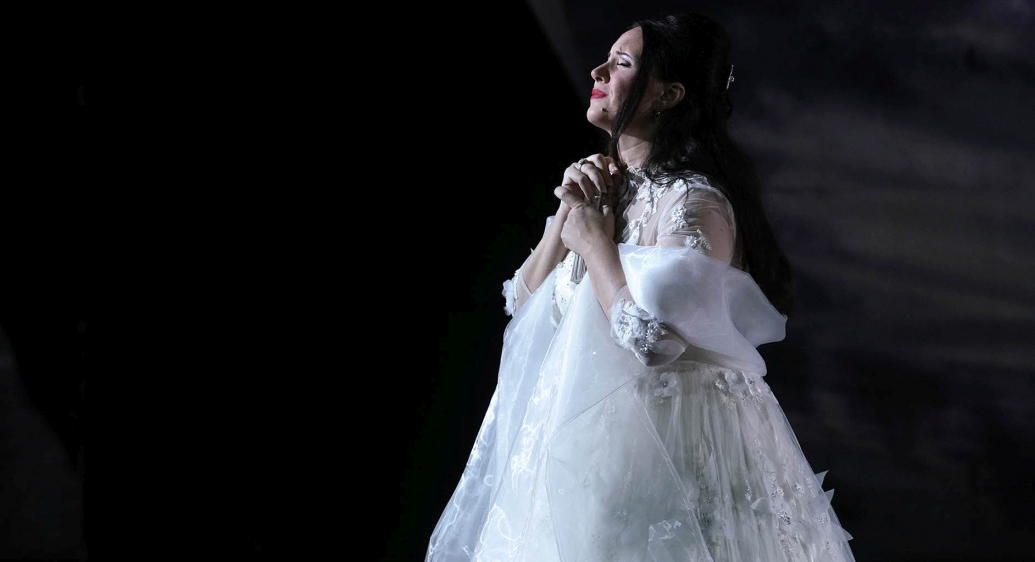 Stellar reviews for “Il pirata” at the Teatro Real of Madrid

Sonya Yoncheva is receiving stellar reviews for her Imogene in Bellini’s Il pirata at the Teatro Real of Madrid. Find out here below what the press has to say about her performance:

“Shrouded in the velvet of a black and gloomy curtain, Yoncheva turned to her dramatic personality and her telluric voice to send the performance into delirium. … her imposing theatrical and dramatic dimension. It was she who revived the evening and who succeeded in breaking the fourth wall.”
Rubén Amón, El Confidencial

“… Bulgarian soprano Sonya Yoncheva turned out to be the true protagonist as Imogene. … Yoncheva dazzled as much for the power and control of her voice as for her interpretative skills, which earned her many “bravos” during the performance.”
Las Provincias

“… she was able to manage her beautiful, silky, and addictive timbric flow, for a strenuous role that exploded in a powerful and expressive final aria to score a well deserved personal success.”
Jordi Maddaleno, La Vanguardia

“Sonya Yoncheva took ownership of Imogene with the security of her powerful means and a wise intuition regarding the strong character who must confront the incongruence of a fiancé who is coming back and the fury of her husband, who is also the pirate’s political rival.”
Álvaro Del Amo, El Mundo

“Very familiar with this production for singing in it at the Teatro alla Scala in Milan, she sings the trickiest passages with apparent vocal self-confidence with magnificent high notes, full-bodied low notes and constantly well executed coloratura passages. She takes generous liberties, but does it with the tastes of an old-school singer, which does not damage at all this type of music.”
Luis Gago, El País

“The Bulgarian soprano consolidates her status as best soprano of our time (…) and offers a vibrant interpretation and precise singing. The high notes that crown a vocalization blow everything away in their wake, in an almost telluric breath, and her full-bodied timbre effortlessly supports the long arches of the first part of the mad scene, her voice not losing a bit of its splendor; the support itself is so firm that her voice seems to unfold with pleasure in the most dangerous moments where a solid technique is required. In this same scene, the descents towards the low register makes you feel shivers down your spine, and the ascents towards the top in the final stanza maintains all its freshness and undulating flexibility. In a few words, this is a role where I would like to hear her again very soon!
Emmanuel Andrieu, Opera Online

“At Saturday’s premiere Yoncheva won the right to be called “La Yoncheva”, if she didn’t already have it. … she concluded the opera with impressive vocal power (the writer cannot avoid recognizing in her timbre – in determined passages – a certain resemblance to La Divina). Her final aria, known as Il pirata’s final scene, immortalized by the above mentioned Callas – one of the most beautiful passages of Italian opera, moved everyone. Bellini required for the role of Imogene, the leading female character, a full soprano, but with great coloratura skills, and in splendid physical shape, and La Yoncheva owns all of the above.”
Isabel Cantos, El Imparcial

“Months ago she showed at La Scala what she could do with the role of Imogene. She joins the great above mentioned sopranos [Maria Callas, Montserrat Caballé, Aprile Millo, Lucia Aliberti, Renée Fleming & Mariella Devia] who have sung it, beginning with “Lo sognai ferito, esangue” to conclude in an exemplary way the final scene, with the high and low notes and feeling in the phrasing.”
Gonzalo Alonso, La Razón