SUPERSTAR SOPRANO SONYA YONCHEVA HAS BEEN HERALDED AS ONE OF THE MOST ACCLAIMED AND EXCITING PERFORMERS OF HER GENERATION.

The recipient of the 2021 Opus Klassik as Singer of the Year is an acclaimed fixture on the most important stages of the world, including the Metropolitan Opera, Royal Opera House, Teatro alla Scala, Bayerische Staatsoper, Berlin Staatsoper, Wiener Staatsoper, and the Opéra de Paris. Her unforgettable portrayals of iconic roles have received tremendous acclaim from critics and audiences alike.

In the 2022/23 season, Sonya makes three debuts in iconic soprano roles: At the Wiener Staatsoper, she sings her first Ciò-Ciò-San in Puccini’s Madama Butterfly, while at the Teatro alla Scala she debuts in two parts by Giordano: As Maddalena di Coigny in Andrea Chénier and in a new production of Fedora, a role she also brings to the Metropolitan Opera in a new production opening on New Year’s Eve. At the MET, she also reprises her acclaimed portrayal of Bellini’s Norma, whereas at the Staatsoper Unter den Linden she stars as Cherubini’s chilling Médée. On the concert platform, Sonya opens the season of the Bayerische Staatsoper in the open-air concert “Oper für alle” and appears in all-Handel concerts in Sofia, Lyon, Versailles and La Rochelle. She also sings for the first time Strauss’ Vier letzte Lieder with the Orchestre symphonique de Montréal and returns to the Festspielhaus Baden-Baden in a Verismo Gala and in a one-off concert performance of Tosca.

Highlights of past seasons

Sonya’s 2021/22 season featured her title role debut as Manon Lescaut in concert at the Staatsoper Hamburg, Élisabeth de Valois in the Metropolitan Opera’s first ever staging of Don Carlos in the original French version. Sonya also returned to the title roles of Tosca at Opernhaus Zurich, of Iolanta with the Berliner Philharmoniker at Festspielhaus Baden-Baden and of Norma at the Gran Teatre del Liceu in Barcelona. She also reprised her celebrated Mimì in La bohème at the Staatsoper Berlin and returned to the Teatro Real of Madrid as Stephana in concert performances of Giordano’s rare Verismo gem Siberia. Sonya’s busy concert schedule included a tour of her Rebirth programme which lead her to the Victoria Hall of Geneva, the Palau de la Música of Barcelona and the Teatro alla Scala in Milan. She performed solo concert programmes in Aarhus, Athens and Budapest as well as for her house debut at the Gran Teatre del Liceu and for her Japan debut in Toyko. In recital, she appeared at the Metropolitan Opera, the Salle Gaveau of Paris, the Enescu Festival of Bucharest and the Berliner Philharmonie. With the Royal Liverpool Philharmonic Orchestra conducted by Domingo Hindoyan, Sonya sang Martucci’s song-cycle La canzone dei ricordi.

Sonya kicked off her 2020/21 season at the Staatsoper Berlin, hosting a Rolex Perpetual Music Concert in support of musicians during the challenging period of COVID-19. Following this, the superstar soprano opened the season of the Antwerp Symphony Orchestra and of the Würth Philharmoniker presenting solo concerts. As Tosca, Sonya returned to the Bayerische Staatsoper, followed by the Season Inauguration Gala concert of the Teatro alla Scala. Sonya concluded 2020 appearing in a Christmas concert hosted by the German President and telecast by ZDF. She began the New Year performing a recital within the Met Stars Live in Concert series, streamed worldwide by the Metropolitan Opera. In 2021, she also starred in the title role of Tosca at the Wiener Staatsoper, in Fauteuils d’Orchestre for French TV, in a Zarzuela Concert in Madrid, in Duparc’s L’Invitation au Voyage with the NOSPR and in Musiques en fête at the Chorégies d’Orange, telecast on France 3. Sonya also appeared in a new staging of Siberia at the Maggio Musicale in Florence and as Violetta in La traviata at the Arena of Verona (telecast by ZDF and 3sat). Concerts and recitals also led her to the Salzburg and the Munich Festivals, the Festival Radio France, to Bilbao, Ljubljana, Sofia, Toulouse and Valencia.

Engagements of the 2019/20 season included star turns as Imogene in Il pirata at the Teatro Real of Madrid, as Mimì in La bohème at the Royal Opera House and in the title role of Médée at the Staatsoper Berlin. Sonya also appeared in concert at the Hamburg Elbphilharmonie, the Moscow Tchaikovsky Hall and the Sofia Philharmonic Hall. Following the global lockdown, Sonya returned the the stage in summer 2020 for Beethoven’s 9th Symphony at the Victoria Hall in Geneva, telecast by Arte, and the prestigious Concert de Paris at the foot of the Eiffel Tower, shown on television all over the world. She subsequently starred in the title role of La traviata in an open-air concert performance in Florence, in a Puccini Gala in the composer’s hometown Lucca and in a gala concert at the Reggia di Caserta. She also presented a celebrated solo concert at the Salzburg Festival, returned to her home town of Plovdiv for a gala concert titled Coming Back and to the Arena di Verona in a gala concert dedicated to love. 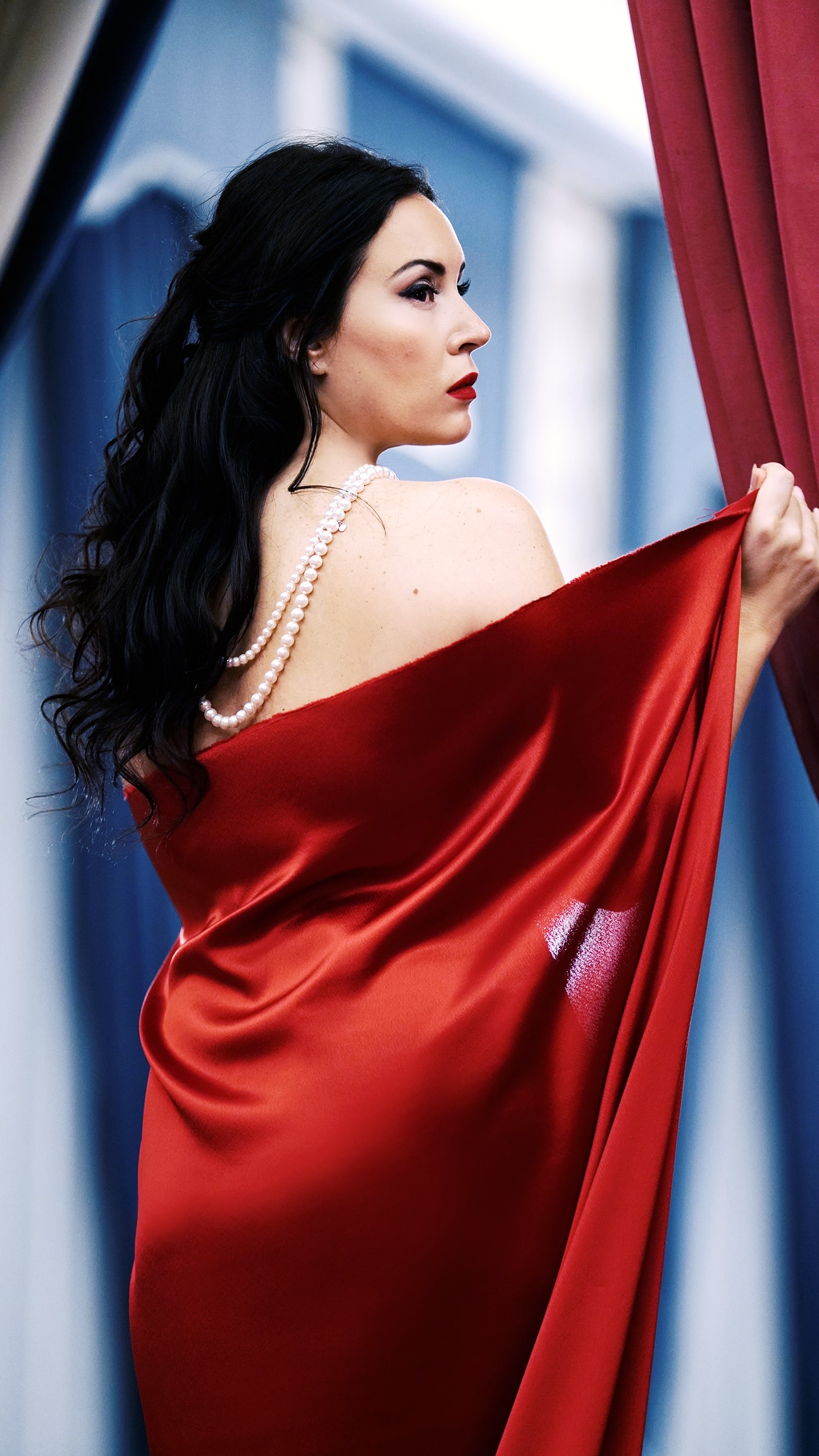 Other past performance highlights include her title role debut in a new production of Norma, Antonia in Les contes d’Hoffmann and Micaëla in Carmen at the Royal Opera House, several Metropolitan Opera appearances, featuring her role debut as Tosca in a new production, her house debut as Gilda in Rigoletto and star turns as Iolanta, Luisa Miller, Mimì, Violetta, Desdemona in the 2015/16 opening production of Otello and in a Gala Concert celebrating the Met’s 50th Anniversary at Lincoln Center. At the Opéra de Paris, she starred in the title roles of Iolanta, La traviata and Lucia di Lammermoor, made her debut as Élisabeth de Valois in a new staging of Verdi’s Don Carlos and appeared as Mimì in a new production of La bohème. Sonya also performed Mimì and Imogene in a new production of Bellini’s Il pirata at the Teatro alla Scala; the title role in a new L’incoronazione di Poppea at the Salzburg Festival; the title roles of new stagings of Cherubini’s Médée and Verdi’s La traviata as well as performances as Tosca and Mimì at the Staatsoper Berlin; La traviata at the Palau de les Arts Valencia, Monte Carlo, and the Bayerische Staatsoper; Tatyana in Eugene Onegin at Deutsche Oper Berlin and Marguerite in Faust at the Wiener Staatsoper, the Royal Opera House, and the Festspielhaus Baden-Baden, where she also starred as Desdemona in a new production of Otello. She was a featured artist at the annual Adventskonzert in Dresden, broadcast on ZDF in Europe.

Sonya Yoncheva is an alumna of William Christie’s Le Jardin des Voix and has maintained a special focus the Early and Baroque repertory. Past engagements have featured her in several iconic roles, including Dido (Dido and Aeneas) on tour with William Christie in Europe, Russia and the US; Cleopatra (Giulio Cesare) in Versailles; and Poppea (L’incoronazione di Poppea) with conductor Emmanuelle Haïm.

Born in 1981, soprano Sonya Yoncheva graduated with performance degrees in piano and voice in her hometown of Plovdiv, Bulgaria under the tutelage of Nelly Koitcheva. Sonya later obtained her master’s degree in voice at the Conservatory of Geneva, studying with Danielle Borst. Ms. Yoncheva is also the winner of several renowned international competitions, including top prize and the special CultureArte prize at Plácido Domingo’s Operalia competition (2010). She was honored as the Singer of the Year at the 2021 Opus Klassik Awards and the Newcomer of the Year (Singer) at the 2015 ECHO Klassik Awards. Sonya is the winner of the 2019 Readers’ Award of The International Opera Awards. She was named the 2017 medici.tv Artist of the Year.

Sonya and her brother Marin Yonchev were lauded as the Singers of the Year in the 2000 edition of the competition “Hit-1,” produced by Bulgarian National Television. Ms. Yoncheva has collaborated with acclaimed popular artists including Sting and Elvis Costello, and she retains a keen interest in film music, which includes her past collaborations with famed composer Vladimir Cosma.

Sonya Yoncheva became a producer in 2020, creating her company SY11 in order to organize her own concerts. Up to the present, the company has organized gala concerts in Plovdiv and Sofia as well as a tour featuring Sonya Yoncheva’s Rebirth tour with stops in Geneva, Barcelona and Brussels.

In November 2021, Sonya Yoncheva became a UNICEF Ambassador in Bulgaria, standing up for children’s rights.

Ms. Yoncheva is also a global ambassador for Rolex.