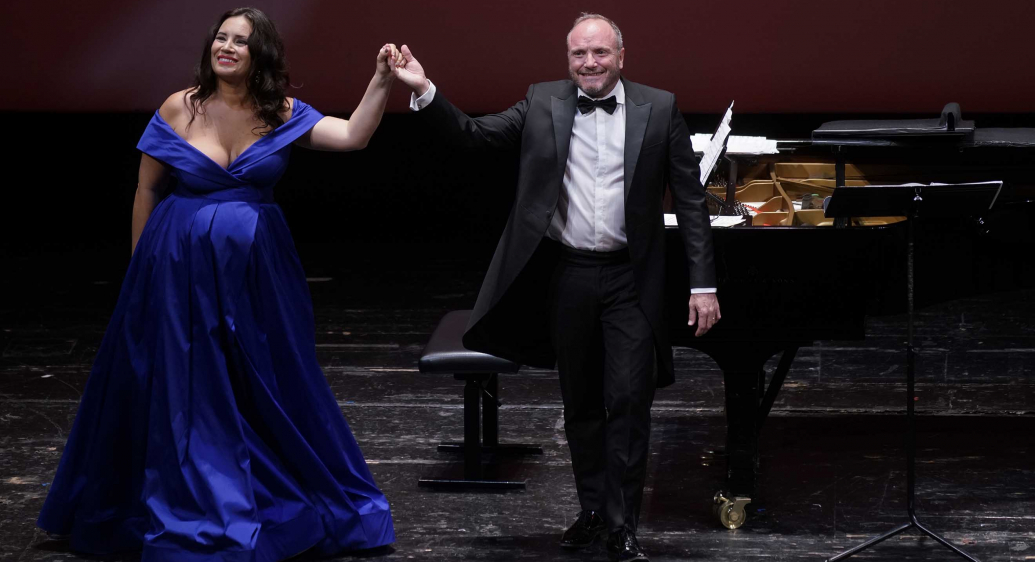 “Madrid: The Teatro Real at Yoncheva’s feet”
“The first part was composed by attractive, easy and slightly melancholic songs by Verdi until it was the turn of the romanza “In solitaria stanza”, which is like a draft for “Tacea la notte placida” from “Il trovatore” – opera which is being performed these days on the same stage – when her voice was able to start to show off in all its amplitude, beauty of timbre and polish. Immediately, Yoncheva attacked L’esule, a scene with an almost concertante recitative, an andante which is an aria with an authentic cabaletta, culminated with brilliance and mastery. She had turned back to the field of opera, which seemed logical for a singer of Yoncheva’s category.
That was not going to happen, however, and in the second part she offered a selection of songs linked by a common lyrical and love theme, which the soprano tackled with a fabulous display of means – mezze voci, pianissimos, filatos -, a flawless phrasing and a radiant luminosity of her instrument. With the good taste, in addition, not to drown pieces modest in their origin and ambition, as it was demonstrated in the perfect rendition of Tosti’s “Ideale” and in the so charming and lovable as well as little known “Amore, amor” by Tirindelli, sung without pretensions, and with a smile on her lips and gestures. Puccini came back again and, just like in the first part, the recital ended with a new sketch or draft, this time of Musetta’s waltz, sung with aplomb and security.
The audience (…) applauded and shouted “bravo” with enthusiasm after each songs, particularly the most operatic ones. The artist replied with four encores, “O mio babbino caro” sung without much effort – with one of her children, a small boy – sitting in a stage box- , the Habanera from Carmen, interpreted with exuberance and fully relaxed, a very fine “Donde lieta uscì” from La bohème and an exquisite “Adieu, notre petite table” from Massenet’s Manon, which served as a farewell, or rather a “good-bye”, as she herself said: until Il pirata which she will interpret on this very same stage next season. The French pianist Antoine Palloc accompanied with competence and personality.”
José María Marco, Opera Actual

“Sonya Yoncheva has a high quality soprano instrument. Fast-flowing, rich, gifted with a wide middle register, full-bodied, well-nourished and polished timbre, undoubtedly attractive…”
“First of all it is necessary to highlight that the second part was superior to the first part, as we found a Yoncheva, dressed with a spectacular blue gown, much more intense, with a much more flowing and shinier voice, tossing some sounds of great quality and timbric expansion, so difficult to hear nowadays.
Raúl Chamorro Mena, Codalario

“For the first part Yoncheva had reserved a curious repertoire by Verdi, with no arias, only art songs composed in his youth, between 1838 and 1845. The Italian genius was 25 years when he composed Perduta ho la pace, the work with which Yoncheva began her recital and she interpreted it like a 25 year old: with naturalness and easiness, as if she were surrounded by friends and not only the stage of one of the most important Spanish theaters. Sometimes it is just this that we should most admire in the biggest personalities of the music world, the ability to to make the viewer feel that what it has taken hours of painstaking study to achieve is as easy as telling an old anecdote to a colleague.
For example, in “L’esule” an exiled man remembers his native land, tells us how it was and reflects about his loneliness,
That is why it starts a cappella, and in pianissimo, and grows as nostalgia for the lost peace burns inside the exiled man. In this regard, Sonya Yoncheva turns out to be an exceptional interpreter as she respects all these issues which at times, I do not know whether it has to do more with being a good singer or good actor. Another no less important element is her excellent pronunciation, thanks to which the listener can clearly understand a letter that, as in the case of these art songs, is very important.
…Yoncheva dominated both, however, once more, her vocal qualities stood out more in the intimate “Ideale”, because although her flowing instrument fills without problems the huge stage of the Teatro Real, what is more surprising is her capacity to tame that vocal stream showing the same harmonic richness in the fortes and in the pianissimos.
At all times Yoncheva could rely on Antoine Palloc at the piano, who was able to splendidly create a background above which the soprano could enjoy herself. You know what I mean: the home of the exiled man, the cliffs of Sorrento on the Bay of Naples, Tuscany … the land of opera, and its sea.”
David Santana Cañas, Bachtrack.com

“In the first part of the concert, six songs by Verdi, she employed the uniformity of the style so as to show off the qualities of her instrument. Her top is shiny, solid and with a ringing power producing emotion and astonishment. The intensity off “Il tramonto”, the light adornments of “Ad una stella” and the legato singing of “In solitaria stanza” (which has some of the melody of “Tacea la notte placida” of “Il trovatore”), certify her mastery of the technique which have bestowed fame on her. “
“But the best, like it happens so many times when a star chooses a song program, came with opera arias, in the shape of encores. Yoncheva gave us four (…) What a generosity! In the “Habanera” from Carmen a small miracle occurred, she changed her color, her voice acquired tinges of mezzo -soprano darkness to which she added that temperament that seems to come natural to her. And as she announced to us, her “Adieu, notre petite table” was not a farewell, but a goodbye.”
Juan José Freijo, Platea Magazine